Ayers Rock was the leading Australian 'jazz-rock' group of the 70s, fusing rock with influences from soul, R&B, jazz and Latin music. The band was built on world-class standards of playing and complex arrangements, and inspired by overseas groups such as Traffic, Santana and Weather Report.

The 5-piece set built their reputation on solid musicianship and complex arrangements and were the first Aussies to play to massive crowds on the US touring circuit, predating The LITTLE RIVER BAND, AC/DC, AIR SUPPLY, MEN AT WORK and INXS. They made two albums before splitting up in 1976, then the band's two vocalists and guitar players reformed again in the early 80's, with the help of new musicians, to record a third album.

Taped live in Melbourne over two nights in September 1974, their first album, "Big Red Rock", is made up of rather bluesy, rock-based songs with sax and flute that give it a slight jazzy feel. Their second album, "Beyond" , 1976, however, is a different kind of beast. Here, the band goes for a much more fusion feel, with great drumming and strong vocals. However, it is not altogether a very even album as the band seems bent on balancing fusion elements with more accessible rock songs; the few fusion tracks contained are still worth a listen. The band's third album, "Hotspell" (1980) is virtually impossible to come by. Andy Cowan played keyboards with Ayers Rock between 1978-81. 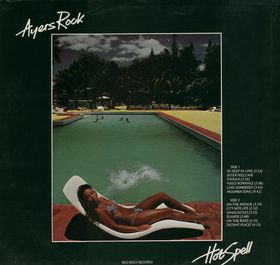